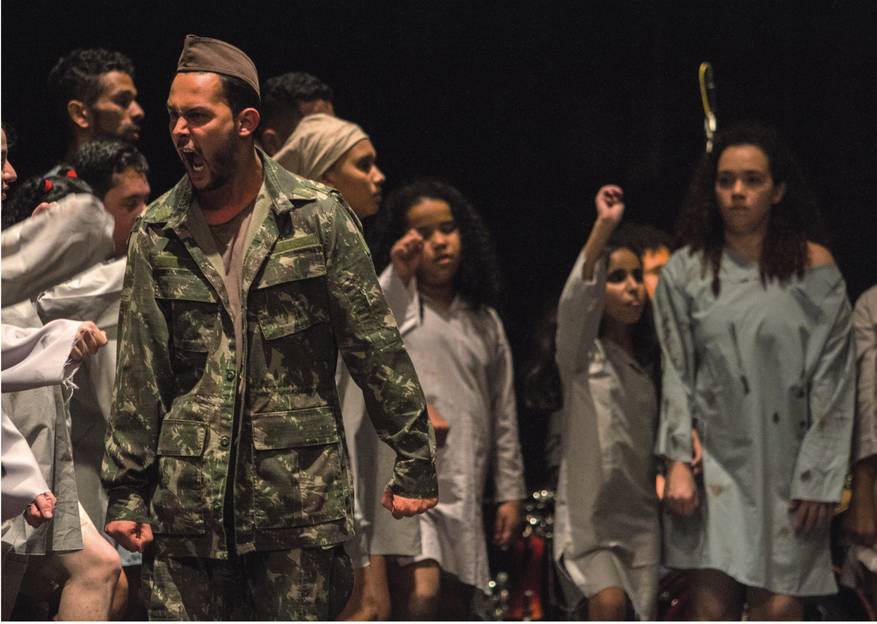 "Endless - Remontagem Brasil" ('Endless – Remake Brazil') (from extreme respect to the experience of a poetic’s difference) is the title of the exhibition that is evident in Gallery 115 A, at Palácio do Gelo Shopping, in Viseu, from November 2018 and closing at the end of January 2019, in an initiative promoted by Teatro Viriato Theatre and curated by Henrique Amoedo and Marlini Dorneles de Lima.

Photographies and a documentary make up the exhibition, helping to refresh the memory of what was the reassembly of the choreography of Henrique Amoedo in the city of Goiânia, in Goiás (Brazil).

The exhibition at the Palácio do Gelo (in Viseu) portrays the reassembly and reproduces dance movements of the preparatory reassembly process to the presentation that took to the stage more than 60 interpreters in a rich opportunity to reflect on the prejudice and the intolerance to a feature that is and will always be present in the human race: diversity.

In January 2018, “Endless” arrived in Brazil through the project “Dançando com a Diferença: Arte, Inclusão e Comunidade”, under the artistic coordination of Marlini Dorneles de Lima, financed by the Governo do Estado de Goiás (Government of the State of Goiás) through the Fundo de Arte e Cultura de Goiás (Art and Culture Fund of Goiás) and in a partnership established with the Degree in Dance of the Universidade Federal de Goiás (Federal University of Goiás), to which were added other partners. In addition to the result on the scene, the process caused numerous changes among the partners involved in its creation, making the respect between people to be above all else, in the creation process. Members of Dançando com a Diferença, Funchal and Viseu, were in the city of Goiânia (Goiás - Brazil) to collaborate with the reassembly process. It is also recalled that "Endless" (choreography by Henrique Amoedo) was also presented last December by Dançando com a Diferença - Viseu, at Teatro Viriato Theather, in two completely sold out presentations.

The documentary “Endless no Brasil – Narrativas Interpessoais na Diferença’’ ('Endless in Brazil - Interpersonal Narratives in Difference'), under the coordination of Júlia Mariano, also shown at the exhibition is the result of the follow-up of the re-assembly of this choreographic work in Brazil and was conceived by students of the Cinema and Audiovisual Course of the Universidade Estadual de Goiás (State of Goiás University) (Goiânia, Brazil), who were involved in the process.