Positive difference in a special day out and at home 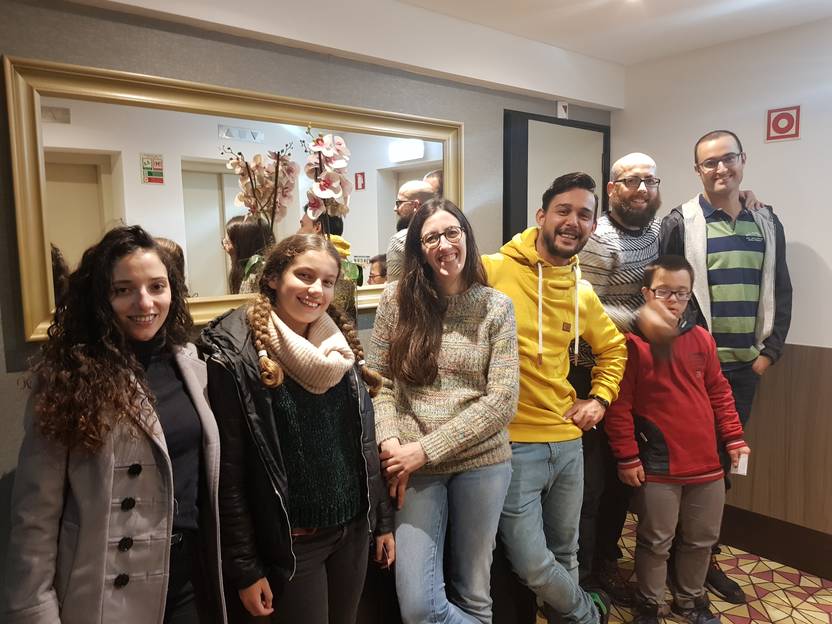 Positive difference in a special day out and at home

Today is another International Day of Persons with Disabilities and it is also a day for Dançando com a Diferença, one of the projects that, at national level, has been most concerned with recognizing the value of people with special needs. It stages in Odivelas, (Lisbon district) and in Funchal precisely to mark this date.

This Monday, the Madeiran group that promotes inclusion through dance, goes on  two stages with the same excerpt from the choreography "Endless". First on the continent, in a ceremony attended by the Presidente da República (President of the Republic of Portugal), the ministério do Trabalho, Solidariedade e Segurança (Ministry of Labor, Solidarity and Social Security) and five secretários de Estado (secretaries of State). Then in Funchal (Madeira), where it all began.

"Endless" is a creation of Henrique Amoedo, artistic director of the group. Released in 2012, emerges from the Holocaust and aims to be a kind of warning so that this assault does not repeat itself. "Endless is a performance where dance, music and video interact questioning the human condition", the group said. "Its main focus is on the Holocaust lived during World War II, not with a historical prespective or approach, but as an artistic work that allerts on the importance of reviewing the past, making its connections with the present, so that - if possible – we take a closer look at what we want for our future", wrote the choreographer.

Part of the coreography will be presented in the scope of the activities day promoted by the Governo da República (Government of Portugal), through the Instituto Nacional para a Reabilitação (National Institute for Rehabilitation) within a partnership with the Câmara Municipal de Odivelas (Municipality of Odivelas). The activities take place in the Pavilhão Multiusos de Odivelas (Multipurpose Pavilion of Odivelas) and in addition to the performance of the Madeiran group, at 10:30 AM, after the official opening, the program includes, debates, performances by other dance and music groups, exhibitions and awards ceremony. The Presidente da República (President of the Republic of Portugal), Marcelo Rebelo de Sousa, the ministro do Trabalho, Solidariedade e Segurança Socia (Minister of Labor, Solidarity and Social Security), Vieira da Silva, and the secretários de Estado da Inclusão das Pessoas com Deficiência (Secretaries of State for the Inclusion of Disabled People), Ana Sofia Antunes, do Turismo (for Tourism), Ana Mendes Godinho, dos Assuntos Parlamentares (for Parliamentary Affairs), Pedro Nuno Santos, da Educação (for Education), João Costa, and do Emprego (for Employment), Miguel Cabrita, participate actively with their interventions.

In Madeira, Dançando com a Diferença, through its association, Associação dos Amigos da Arte Inclusiva - Dançando com a Diferença, will be present at 10:30 AM in the ceremony of signature of the collaboration protocols with various entities working in the area of ​​support of the disabled person. It is one of the entities contemplated with the Regional Government supports. Later in the afternoon, at the closure of a day of activities promoted by the Secretaria Regional de Educação | Direcção Regional de Educação (Regional Secretariat of Education | Regional Directorate of Education), it will take to the stage with the presentation of the same excerpt from "Endless" in La Vie Shopping Center, at 4:45 PM. The presentation is free entry. The entire regional program of celebrations can be seen on the last page.

The performance "Endless" in full will be presented next Friday and Saturday at the Teatro Viriato by Dançando com a Diferença - Viseu, an extension of the Madeiran project, created in a partnership between the Local Council  Social Action - Viseu, the Dançando com a Diferença and the Teatro Viriato. There, like the work carried out in Madeira, the group develops activities with a cast of people with and without disabilities, institutionalized. In Viseu there are 40, under the direction of Ricardo Meireles.